Bud break was on time with April being warmer than average followed by a slightly cooler May. In June we were faced with the famous heat dome. The intensity of heat had a big impact on the growth of vines. We ended up being significantly ahead of previous years. To give you a frame of reference, June and July were the warmest months since 1998.

This warmth forced us to adapt our vineyard practices and start to irrigate during the nights. We increased our water usage knowing the plants were going to need more during the heatwave.

The Osoyoos fire, which eventually spread all the way along the Black Sage Road, started July 19th. Fortunately for the grapes, the winds were blowing and pushing the fire east. 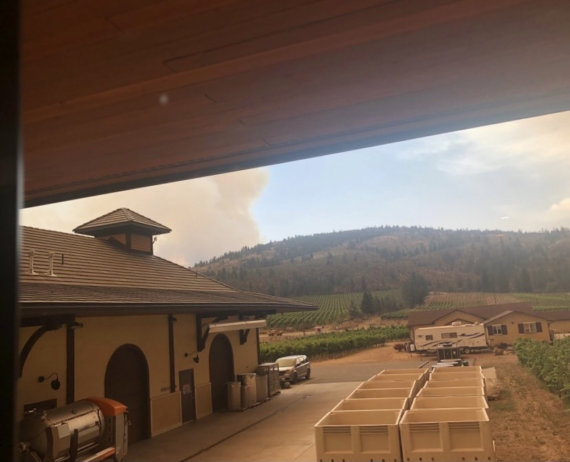 The smoke due to these fires were more present before veraison.  Once veraison happens the skins are softer and thinner and can potentially absorb more smoke compounds. What we have experienced so far is that 2021 has been influenced less by the smoke than in years like 2015 and 2018.

This is partly due to the smoke dissipating more and more by the middle of August. The smoke was more intermittent, we would have clear days, then smokey days. This caused a temperature inversion created by the smoke and ultimately gave us cooler conditions in August.

Normally we would stop watering the vines after veraison to stress the plants, but due to the heat stress already present, we opted to continue watering knowing the vines would need that water for their own health.

September in Osoyoos was average and October was cooler than normal. We ended up having frost on October 9th. Thankfully, we were able to pick and process the grapes under great conditions.

Due to the heat we adapted and did not de-leaf until very late to protect the grapes from the sun.

We anticipated quickly that the berry size would be small due to the heat happening during cell division. The plants shut down during the intense heat, therefore we minimized green harvesting. Green harvesting is used to maintain a balance between the fruit weight and the canopy. After this adjustment, we decided to leave more leaves to provide a shady environment for the grape clusters to avoid sunburn.

We also ended up watering more than usual for the ultimate health of the plant. Later in September, we observed a dichotomy between the phenological ripeness (maturity, tannin and colour) and the physiological ripeness (sugar and acid) forcing us to pick a little later than we would have normally. The corresponding wines for 2021 will have higher levels of alcohol than usual for the reds. The whites, Chardonnay and Sauvignon Blanc are more of what we are used to due to the early picking we normally do.

Because of the heat, the skin of the white Rhone varieties were thicker than normal and noticed some bitterness on the palate – we waited to pick slightly longer and adapted the press cycle to extract less from the skins and the corresponding wines are great.

So far the wines are delicious and even though the quantities will be small the overall quality is high. The Syrah’s were finished just after thanksgiving and are fermenting nicely.

Update: fermentation is finished and now the Syrahs will be resting in barrel and concrete for the next 13 to 18 months.

2021 was already shaping to be a very dry year and the June heat dome increased our concern of severe drought. Based on our weather stations we received 74.2 mm of rain at Le Vieux Pin vineyard. These numbers are significantly below the 250 mm of yearly rain we usually get. These conditions forced us to adapt our vineyard practices: less leaf removal on the vine to create shade, less green harvesting, tractor work like mowing, foliar spraying, and our organic treatments were sprayed at night. Most importantly, we started to irrigate at the night. We increased our water usage knowing the plants were going to need more during the heatwave.

Thanks to all of this extra work, we know we fared significantly better than what could have happened due to the 2021 conditions. This also played significant stress on our vineyard team. Adjusting our schedules to spend more time working at night, implementing more safety protocols (head lamps, working alone at night policy, people on call in case of an emergency), and ultimately team morale can wane while adjusting to these changes.

Thankfully we are getting into a better work-life balance and recharging over the winter months is coming soon.