Read the back story, but the olive oil we carry from Le Cooperative de Clermont L’Herault is a field blend, and is an AOC.  It will have the AOC varieties in the blend… from memory that will be a mixture of aglandau, picholine, lucques, verdale and possibly negrette.

In the massive freeze of ’56, many or most olive trees and vines in Italy,France and northern Spain were frozen and killed.  The French replanted their southern holdings with vines, the Spanish with olives and the Iltalians split it down the middle.

Spain has the highest production of olives, and Italy has the quality reputation… and generally, people do not know that France produces oil… because like this valley, the production is very small, highly artisanal (even more so than Italy) and consumed locally.  We have this product because Sev and I were cooperateurs and the Mill has a French/Canada trade program… if you could call it that.  We are perhaps the only country, where this oil is sold.

Compared to Spanish and Italian operations, French production is like pruning banzai.  The Spanish prune with chain saws, and an average tree takes 6 minutes.  The average prune time in France is 60 minutes.  And pruning is done with hand shears and hand saws for the bigger branches.

The Spanish will prune once every two years, which will give you a big and little crop every other year… and varying quality.

The French prune a little every year, and try to maintain a consistent yield from one year to the next.

Le Moulin de L’Herault has a “Fruity, Green” objective, and though the production of oil is reduced when olives are picked slightly younger (still black, but not desiccated) in December, the quality of the oil is greatly increased.  This oil has notes of grass and nuts and is slightly subtler than the Intensivo (which is also an excellent oil). 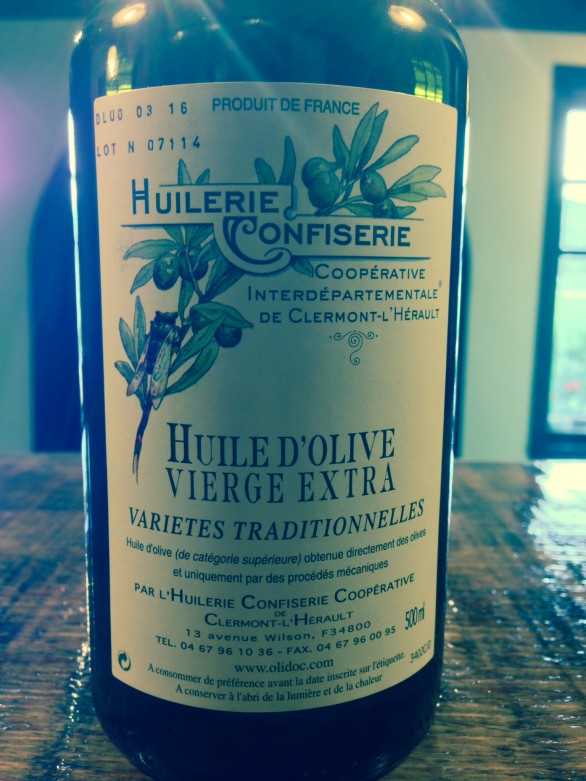 This oil is extra virgin, which means that not only is it a product of the first cold press, but that it is (like grapes) pressed as soon as possible after harvesting, in order to keep oxidation at a minimum.  It is the level of acidity and not the press that determines whether an oil is Extra Virgin or not.  That’s why you can never have a hot press Extra Virgin, but you can have a First Cold press that isn’t extra virgin. Olive oil should be kept in the dark, and should never have head space, both of these conditions will detriment its acidity (thus its Extra Virginity).

Severine and I farmed a plot that went into this very “cuvee” for seven years.  Owned for generations by the same family… the trees, had frozen in 56, but they trained the existing grove out of the shoots that sprang from the roots.

In front of the grove was also an Old Pine tree (no word of a lie) on the Roman Road that followed the southern border of the acreage (you could see deep cart tracks carved into the limestone from centuries of travel).  The old man who sold me the parcel made me promise not to cut the old pine, which was famous in the village, and also made me promise not to rip the olive trees out to sell as decorative landscape pieces.

The value of each of the trees as a decorative piece was 100 euro to a Landscape Nursery- we had 200 on the land.

I sold the place to the next owner and made him promise me he wouldn’t rip them out- but I don’t know if his word was as good as mine… and I could not  bear the thought of visiting it and seeing the trees gone.

The production of this oil is the result of many villagers who meticoulously tend their trees, from as many as one tree owner to 1000 owners, contribute.  Most people harvest their grand old trees and take their 7 or 15 litres for themselves.  Oxidised or damaged olives are not taken, and picking windows are set and kept.  You can not slip your old olives in under the wire.