When we first journeyed to the South Okanagan we were blown away by its unique geology and climate; our minds filled instantly with thoughts of making world-class wines. We were convinced that with enough time, care and attention, trial and error, dedication and sweat we would find the unique story the land has to tell.

In 2006, only our second vintage, we had our “eureka” moment – beginner’s luck perhaps.

A single parcel of 14 year old Cabernet Franc vines in our Golden Mile vineyard we call La Feuille D’or (the golden leaf) yielded something very special. This vineyard has a relatively cool micro-climate within a warmer meso-climate (the South Okanagan) in the cool macro-climate of the Okanagan Valley. Golden Mile is located on the western side of the valley so it features warm sunny mornings, early hot afternoons, cool evenings and cold nights – a very desert like climate.

Early during harvest in 2006, it became clear that something special was at work in this parcel. We were excited to witness vines that had produced visibly smaller berries with thicker skins than expected for Cabernet Franc. The fruit had fully lignified seeds, completely ripe fruit flavours and healthy sugar levels but with high acidity. Initially we were concerned about the high level of acidity so we waited a little while before harvesting the grapes, hoping for a small drop in acid levels. In spite of our attempts, the acidity did not drop – an effect we would later be delighted by. We had identified that this was going to produce something special but sadly we had only a mere half ton to work with. We put on silk gloves and treated the fruit with exceptional care. The fruit was hand de-stemmed to ensure we kept complete berries and that no jacks (small pieces of broken stems) were left. This resulted in a rather extreme form of hand sorting as each individual berry was examined.

After a natural ferment in an open top stainless fermenter only the free-run juice was kept resulting in 200 liters of wine. Since this was an insufficient quantity for a standard 225L barrel we had to order two special 100L barrels to use. The two barrels had to be specially ordered from France and were made from three-year air-dried old-growth French oak staves with extra tight grain.

The resulting Equinoxe Cabernet Franc 2006, captured our imagination and showed us an intriguing combination of new and old world qualities. The wine showed us simultaneously lush, exuberant fruit flavours with good natural acidity and elegant structure.

We were eager to show the world what we had created so we conducted tastings with influential wine critics. The response the wine received thrilled us:

After the initial euphoria had subsided we began to ask questions: “is Cabernet Franc the “it” grape?” “is Golden Mile the special spot in the Okanagan?”, “was it the 2006 vintage that was the key?”

We stayed vigilant looking for varieties, vineyards and vintages that shared this collision of contrasting styles. We have five sites throughout the south with a variety of micro climates, exposures, geology and elevations. An entire year passed and sadly only the Cabernet Franc from the same tiny plot in Golden Mile showed us the unique attributes we were looking for. In 2008 we continued the search, with perhaps more reserved expectations. At harvest we started to see grapes that lifted hopes and spirits and hinted at what we were looking for. Along with our darling Cabernet Franc, some Merlot from a small portion of the same Golden Mile vineyard and some Syrah from a second vineyard further south in the Golden Mile both showed some exciting potential. These two discoveries meant that two new Equinoxe siblings were born.

Fast forwarding to the present we have learned many things in our search: certain varieties never seem to capture the essence of this new world/old world dichotomy that we seek; sometimes young vines produce grapes that achieve terrific results, rivalling those of old vines. One more lesson we’ve learned for certain is that only single varietal wines are transparent enough to let this story be told.
Intriguingly the same grape variety or site does not appear to produce these results in every vintage. However there are some vineyards that, so far, year after year seem to have the best success rate, our Feuille d’Or vineyard in Golden Mile is certainly one of these.

Our trials and experience has also brought us a deeper understanding and greater respect for the South Okanagan Valley. With a latitude north of the 49th parallel the growing season is quite short. The South Okanagan is also a desert climate (with less than eight inches of annual rainfall in Osoyoos): it is very hot during the day (hotter than Napa valley during the summer months in fact) and quite cool at night. To round out this unique area the air is extremely clear and clean. When we look at the soil in our vineyards we find a huge variety of soil types: some sites are very high in white silica sand while others are quite gravelly and rocky, some sites even show traces of schist and shale. With all these contrasting terroir elements working together it is not surprising that the true expression of the region is a harmonious contrast of old and new world wine styles.

Calling Equinoxe our reserve tier would be correct in a sense – certainly they are our rarest and priciest offerings. They are our special children, the reason we get up early in the morning and continue the back breaking work. However, many wineries select their reserve tier wines based on a historical vineyard or single vineyard status, “old vines”, extra or special oak aging. For us the program is more organic and flexible. Throughout our winery we handle fruit separately depending on its source and identify special lots as soon as possible. This gives us many avenues to achieve the results we want; we’ve made Equinoxe wines from sites cropped as low as 0.9 tons/acre and as “high” as 3 tons/acre. We’ve made Equinoxe wines from some of the oldest vines in the Okanagan (39 year old chardonnay) or vines as young as three years. We feel that in a wine region as young as the Okanagan the ability to be flexible and adapt is vital to achieving the results we seek.

Overall we believe that each and every Equinoxe wine we’ve crafted captures the true essence of the South Okanagan valley and is something everyone at the winery is extremely proud of. 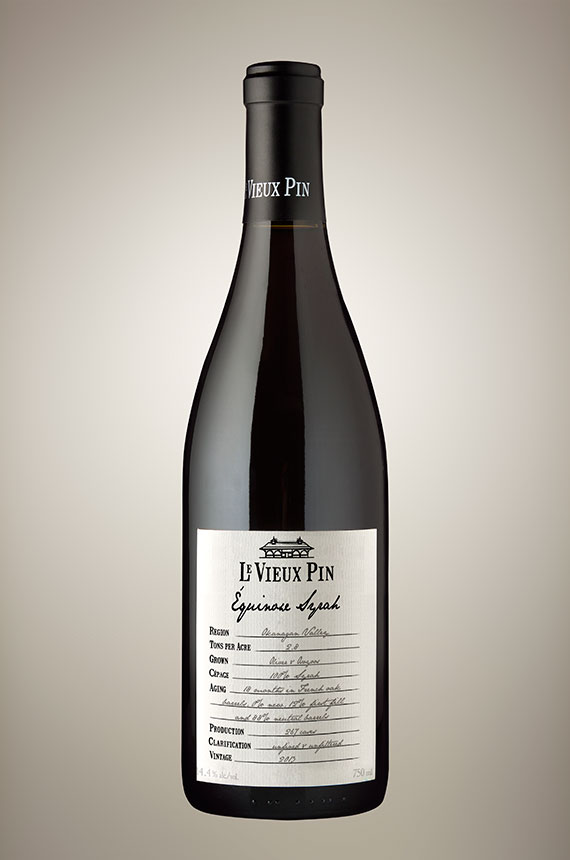