The 2013 Vintage was not without its successes and challenges, a departure from the amazing consistency of 2011 and 2012 wines across the valley and across all price points. 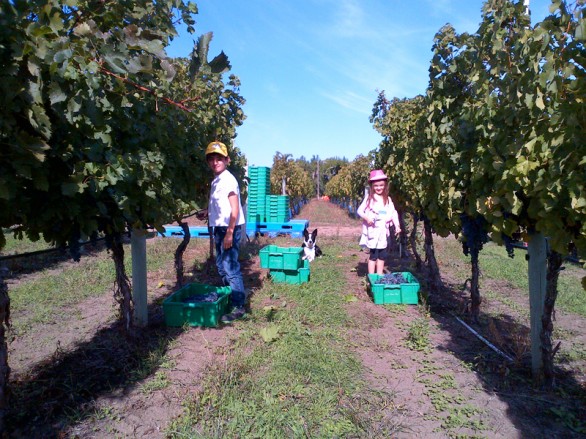 Volatile weather systems and hail storm challenged producers throughout the valley (latter mostly affecting our friends and colleagues in center and north of Okanagan). At Le Vieux Pin, a specific emphasis was placed on canopy management and lowering the yields to offset the above concerns.

An unusually warm late March carried into early April and by the 11th we had bud break. This important vintage marker was met three weeks in advance of our usual South Okanagan timeline. This significant checkpoint met at a time that would be typical in the Languedoc-Roussillon, without the moderating effect of the Mediterranean. This warmth continued steadily throughout the summer recording one of the hottest vintages experienced in over a decade (last was 1998 and then 2003). By summer’s end we were well ahead of schedule and certain vineyards were reaching phenolic maturity weeks in advance of prior growing seasons.

With seat-belts fastened and a sense of cautious optimism we prepared to harvest red and white grapes from several vineyards. After harvesting over one third of the crop, mid-September threw us an Okanagan curve ball and brought rain halting physiological maturity and raising fungal concerns. Fortunately soon the rain and angst dissipated giving way to a memorably dry and sunny October. This and being on very well drained soils, allowed us to finally take advantage of another unique season in Canada’s only pocket desert.

As a wine fan and consumer, it’s wise to exercise caution and purchase from producers willing to adapt to the specific challenges that 2013 brought. Wines made from fruit grown on valley floor and less than perfectly well drained soils ended up with considerable amounts of bunch rot and in best cases dilute and watered down flavours. Producer, producer, producer, site, site, site is the message in 2013.